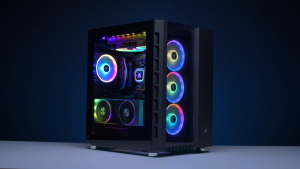 My primary motivation to look into getting a gaming PC was performance. My primary workstation was an Alienware 17 R4 laptop from 2016. It was ahead of its time then and still was handling my regular work more than well but when it comes to modern games and their increased hardware requirements, it could not handle those anymore in an enjoyable quality.

After four years, I felt that a new computer was due. And why not pick one that can do all of it with ease. So I went on an exploration to find out what I should get. Read more about that here.

What did I want?

When I started exploring the options for getting a powerful gaming PC, I was pretty sure what I wanted.

But after 20 minutes of surfing around …

…I felt like having opened Pandora’s Box being confronted with the vast amount of options I could chose from.

At first, I targeted at getting a ready-built product from my favorite brand.

I admit, I am an Alienware fan. I loved the brand and its products since even before Dell took it over, Not the best in all aspects but surely a high-end provider and so cool to have the name and logo lit up on your devices when friends are hanging with you.

So my first stop was to check the current laptops they have since I was using the 17 R4 from 2016. I checked the new M17 first.

The new M17 is slim. Oh my god is it slim. When watching the product video I said to myself “Really, they think slim is making it cooler and better?”. In fact, I was turned down by it. I want fat, thick and heavy because that stands for performance in my visual perception. Several user review videos seem to confirm that targeting a slimmer built contradicts to getting high-end performance. Naa, no good,

I learned about the Area 51 laptop in those videos. Fatter and thicker. Hmm, nice I thought. But again, user review videos revealed that it is not it either when you are looking for high-end no-compromise performance.

Cooling, power consumption and battery lifetime – general downsides of laptops of any brand seemed to be a topic here as well.

A friend then asked “Why a laptop anyway?”. Hmm, good question. I have my 17 R4 already for being on the road and most of the time I am working stationary anyway. Ok. let’s check what Alienware has in stock for Desktops.

Of course, the Aurora pops up. First thought:

What the heck? What kind of design is that?

Yes, it is unique and it probably won a price but – no – not man-cave compatible. Of course, it is a matter of taste, but that was not what I want to have sitting under or on my desk.

Other friends recommended to check out Corsair for their casing design and ready-made computers. 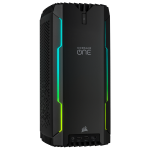 Browsing for Corsair, I quickly found the Corsair One, a ready-made very outstandingly designed workstation.

User reviews were majorly positive and I was inclined to get one of those. The case design is awesome, so small while putting so much power into it without getting any cooling issues. Another Pro was that it was about 500 € cheaper than the Aurora.

But looking at the super narrow case and how tight the components are built in, I felt that it was not future-proof enough for upgrades with default size devices, e.g. graphic cards. 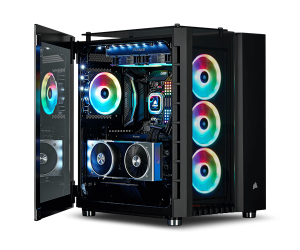 At that point it was only a small step to checking out options to built my desired custom PC myself. I didn’t want that at first. I was shy of the work inolved and having no vendor and its warranty behind my new PC.

I gave it a shot anyway and watched a load of videos about building your own dream machine. I have to admit that it got hooked. It did not seem to be too difficult. But most of all, you can really tailor it exactly as you like.

Convinced by the freedom of choice for every little aspect and component, I decided to go that route.