Any of you musicians that have seen scores or lead sheets from some European countries may have stumbled upon the note “H” for what you are used to know as the tone “B”. So what is that all about? 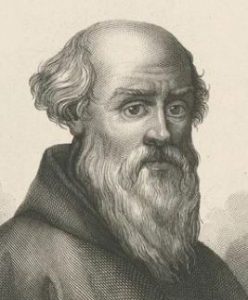 lived around 990-1030 and was an Italian music theorist of the medival era. He is regarded to as the inventor of our modern musical notation. The notes were marked with circles on a 5-line row, but they were also named with letters. And of course, nicely done in alphabetical order:
A B C D E F G

Dear Guido figured though that there were two flavors of the B note in the musical arrangements of those days. The “B-quadratum” (the real B) and the “B-rotundum” that is one semitone lower than the real B (so actually that would be a “Bb” or B-flat). But both of them needed to be on the same line of the musical sheet.

So, instead of the usual circle, he chose two different symbols on the same line to identify them:

Later on, in the English tradition, the B-quadratum was noted as “B” and the B-rotundum as “Bb” (or B-flat).

But … somewhere else in Europe, some smart-ass said: Hey, that B-quadratum symbol looks a little like an “h”. Let’s name that note “H” and the other one, since it looks like a b, we call “B”.

Obvisouly, there was no qualified approval process for these things in those days and several European countries decided to go with that assessment. Since then, in Germany, some Scandinavian and Slovenian countries the real B is an “H” and the real Bb is a “B”.

If that smart-ass only knew what a chaos he would create. He even changed the alphabet for God’s sake:
A H C D E F G

So, if you are supposed to play a “B” chord again, first check what country you are in…

There is another version of the story, and I have to admit I like this version better :-).

That story says that at some point a stupid monk copying a score sheet (and I mean taking a papyrus role and draw the whole musical sheet again) just forgot to close the b at the bottom with his ink feather. Or maybe the ink ran out. Anyway, that made the b look like an h. And boom zoom, he messed up the entire musical notation world in Europe.

On the other hand that does not sound very plausible. The monks in those days were very educated, they knew about science, medicine, astronomy and more and such a simple mistake would have been discovered quickly by others, if not by the musicians trying to play off of a faulty score sheet like that.