What My Situation Was 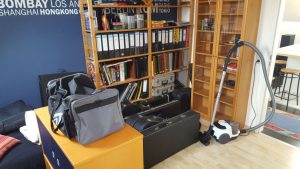 I play instruments and sing. Over time I collected several guitars, keyboards, amplifiers, effect devices, microphones, cables ... you know the deal. When I was writing or rehearsing, my equipment was spread all over the place. Stowing it away again after playing was a necessary evil to make my apartment presentable again. But even then, the cases and boxes occupied considerable space in the guest room. It was used seldomly enough so that it didn't bother much. I neede a plan.

I also started recording music a few years back with my regular office/gaming/media PC. I purchased a Cakewalk Sonar X2 license, a fairly good and affordable home recording software that got me started. First I used the PC's soundcard, later I got myself a cheap USB 2-input audio interface by M-Audio. From my live performances I still had a Shure SM58 and an EV BK-1 microphone. That was good enough for demo and concept recordings.

After a while, the recording quality of my beginner's setup was just not good enough anymore. When I got more and more involved in musical activities the stowing away of the equipment became a real drag too.

One of the four key requirements for a home recording studio I mentioned earlier is having room for it. Looking at my barely used guest room I could clearly confirm that I had. My bank account didn't look that bad and I had the time as well obviously, because I was already spending it on music. Most of all, my girfriend supports me all the way and little time did it take to come up with the following plan: